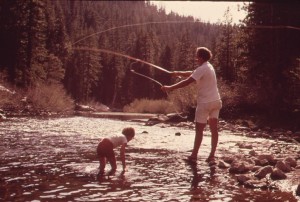 Fly fishing is the sport of presenting an artificial lure to a fish that is an imitation of an insect. It involves imitating the fish’s food base so it gets to take the fly, which is bait and in the event it is caught. The artificial flies used resemble insects that float on water surface like grasshoppers, ants and other insects that live under the water. To start fly fishing, you need a line, some artificial flies and a rod. Materials used mostly in creation of the artificial flies include;

Involves standing with your shoulders square, gripping the rod with four fingers wrapped around the rod’s handle, thumb on top and reel facing down. Move 25 feet of line off the reel and feed it out of the rod. The line should be laid completely straight with you standing square towards your target. Accelerate the rod up and backwards, starting with the rod tip, in a smooth motion.

In this method there is no aerial back cast. The line is instead drawn backwards slowly and hung in a slack loop off the tip of the rod; this creates the weight required to load the rod for the forward cast. The line appears as if it is rolling over the water’s surface, hence the name roll cast.

It is useful for casting on the opposite side of the body. There is no switching of the rod from dominant hand as it is employed throughout the casting. While on the caster’s dominant side, the rod is raised over the head high enough then tilted hence performing the casting planes across. In this position, the rod tip passes on your backhand side.

While the line is extended in the air at the back, the rod is brought forward in a smooth, accelerating stroke. When the tip is high, you stop the rod to allow the energy to transfer into the line sending it forward. Lower the rod as the line unrolls.

Takes advantage of the wind. When casting into the wind, the back cast is angled high where the wind straightens it out,

Made by overpowering a higher forward cast by abruptly stopping it. Some speed is put into the tightly looped cast, this causes the fly to turn over and under the leader, the fly lands first. It allows the fly to sink freely. 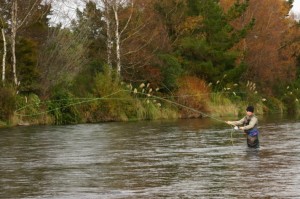 It is made slightly after the forward cast stops by reaching the rod into the direction you want the line belly to travel. Enough tension is kept on the back of the loop so that it maintains enough momentum to re-position the line belly.

In this method, a curved line is thrown under the leader, the curved cast reduces the effects of the drag.

A very high cast that is almost straight up on the back cast. The line is brought forward then down sharply.

Get our Secrets To Fly Fishing in salt water. Have you ever wanted to try fly fishing in the ocean? Imagine catching a large tuna on a fly rod. We'll tell you how you can do it with our guide to salt water fly fishing. Join our monthly newsletter below and we'll send you the guide at no cost.